Helicopters and foot in mouth syndrome.

It's confession time again. It's good for the soul

There are a number of things in life that I unexpectedly found unsettling and which made me quite nervous.

One such is helicopters, sometimes known as choppers, whirly birds, petrol pigeons or diesel dodos. 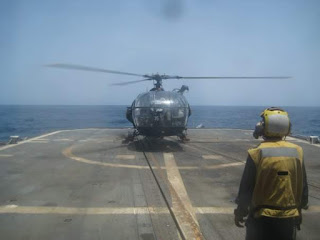 I had quite enjoyed my first helicopter flight, in a beast that looked like the love child of a goldfish bowl and a budget Meccano set. It was Royal Navy helicopter called a "Wasp".  That was a fun tour of the countryside around Devon. All I needed to do was blank out the thought that it had only one engine.

I also enjoyed being dunked in the "dunker"; a mock up of a helicopter fuselage that gets dropped into a great big swimming pool and spun round so it's upside down.  You get to fiddle with a complicated seat belt, watch some bubbles and find your way out with everything back to front and inverted.  All this while wearing overalls and those naff looking plastic helmets that outward bound centres use.  It reminded me of the first time I rescued a black rubber brick whilst wearing my pajamas.


However, there then followed a series of less than positive experiences.  These included looking for a lost helicopter in a very big sea, (another ship found it and rescued everyone), watching a Lynx helicopter slide gracefully off a ship's flight deck into a pretty lumpy sea and several times feeling very travel sick in the back of helicopters.  To my mind, it felt felt like being in the very back of a support group van, with smaller seats, your worldly possessions on your lap, no windows, deafening noise and an overwhelming smell of diesel all the while being driven at high speed round a roller coaster track.


Another thing is that I tend to say something I later regret whenever a helicopter flight is involved.  Some minor example are, "That's no problem, of course I will sit wedged in the back here behind all this kit whilst you sit by the only exit - and window", "No, that strap is just fine, not too tight at all", "Why does your navigation system look like an old car Satnav tie wrapped to your instrument panel", "Should that dial really have all those cracks in it?".


My most ill considered comment came halfway through a "ride along" helicopter flight in an American police helicopter. It had been arranged by some kind friends and I was really grateful for the effort they had gone to in arranging the surprise for me. It was in southern California on the second day of a trip to explore the west coast of the US, a part of the world I had never visited but seen on the telly - a lot.

Anyhow, having been told there was no need to wear a bullet proof vest in the helicopter, and had the safety brief from the pilot I guess I was rather unsettled and nervous.  However, faced with two very all American hero cops I found my stiff upper lip and off we went.  As a true Brit I chatted about the weather and how rainy it was in Cornwall.  As a cop I gave as good as I got with the banter.

It all took a turn for the worse when the banter and chat about the weather collided.  I had just made some comment about two solid weeks of rain and drizzle at home and said there had not even a sighting of the sun.  I think I went on to say how great it must be to get constant sun and live your life with a Hollywood suntan.  With a rather abrupt change in tone, the co-pilot said "What do you mean?".  I said something along the lines of, "With a tan like yours you would be the envy of every pasty faced Cornishman".  His response was, "I'm Spanish".

It was a really quite helicopter ride after that.

PPS The one in the photo was the one with cracked dials and the "after market" Satnav.

To save a life.

I looked for a picture I could use to open this blog entry. To grab your attention. To draw you into reading it. I found the perfect one.  It is a picture of a young person who must be about 13 or 14.  They are sitting up straight, with neatly brushed hair, clean and ironed clothes and a cheeky smile on their lips.  It looks like a professionally taken photo.  Maybe a family portrait or a school photo. I won't use it though.


You see, I was looking for an attention grabbing car smash type picture. I wanted a picture that would encourage us to think about how shocking and wasteful road traffic collisions are. But I came across this picture which had been shared by this young person's family, a family that will never see them again.  But I simply can't bring myself to use such a beautiful picture, or any of the others of mangled car wreckage. I will just have to make do with writing about what I want to share with you today.


What I want to share is this.  I want to publicly say thank you to a team of police officers and police staff whose work has saved more lives in Cornwall and the Isles of Scilly than any other team I know.  They go out there and to do their job every day despite facing criticism, ridicule and anger.


And this team doesn't face ridicule and anger from traumatised victims or drunken idiots.  Police everywhere are used to and expect to take abuse like that once in a while.  These heroes face it every day and rise above it.  The abuse comes from that strangely inclusive group to which many of us belong; motorists.


Thank you to the Devon and Cornwall Safety Camera Partnership.  Life savers, every one.


Here I have to also admit that the first thoughts to pass through my mind when I see a fixed speed camera or a white police van with a camera window are usually ill considered and not very charitable.  It worried me that I thought like that, especially as I know a couple of people who work in the safety camera partnership and they are really good people.  So I asked one of them if they would help me write a short entry in support of what they do.  And this is some of what I have learnt.


Driving too fast kills more people on our roads than anything else we do in cars, lorries, vans, buses or on motorcycles.


The fixed cameras and the mobile cameras are where they are for a reason; usually because more than one terrible thing has happened.  We also see how fast people are driving and count up the terrible things that happen after the cameras are there.  We drive slower and less people die.  Those in the know call it "cluster route analysis".


Often the people that live somewhere ask for the safety cameras and like them being there.


Police don't just pick a site and away we go setting up cameras willy-nilly.  We talk to lots of other people and decide together where they should go; people like Cornwall Council, Schools, Parish and Town Councils and the Highways Authority.


There are, I am told by a source who has proved reliable in the past, more miles of road in Cornwall than there are in Belgium.  I'm not about to get out a measuring wheel to prove the point one way or the other, but I hope it's true.


So that's it apart from to say I hereby pledge not to borrow a few miles per hours from the speed limit just because I am running late or because I can, or consider the speed limit as a target speed in all road conditions.  It would be great if you did too.


PS, I hope you enjoyed the read and please be kind to each other, and honest in what you do.


PPS, It kicked me right in the emotionals when I saw the picture of that young person.  My thoughts and prayers are with their family.

Links you may find interesting